There are various types of lures by drift anglers on Lake Erie.  One of the original and favorite of most drift anglers still today is the weight-forward spinner.  A weight forward spinner is no more than a weighted lure, with the spinner in front of the lure body.  Aptly known as weight forward spinner.
A solid performer and trusted still by many.  Anglers can't go wrong when using this lure. This lure will never be 'out-of-date' and if you do have some in your box, you probably have them in different weights and colors.  Weight forwards can come in weights as little as 1/4 oz. to as large as slightly over an ounce.  For most anglers, the perfect weight for most is 5/8 oz. to 3/4 oz.  But if an angler is still choosing to use them later in the summer when the fish go deep, better have a supply of 1 oz.

These lures can come in many colors, while some are even plated.  Probably the color most sought after are the gold-plated variety, second to lemon-lime (yellow chartreuse and green).  Over the years there have been many top performers that include blue/white, red/white, chartreuse, green and white, including gold plated with a dash of either orange, black, green or yellow.

These are lures that must be used with live bait.  Ninety-nine percent of anglers using weight forwards will use it with a nightcrawler.  I've known a few to use leeches also, but worms are still the best.  I prefer and will also tell my charter patrons to use a whole crawler for this lure and simply gob it on the hook.   Occasionally, leaving a little bit trailing doesn't hurt, but too much will often lead to a lot of misses due to short strikes. 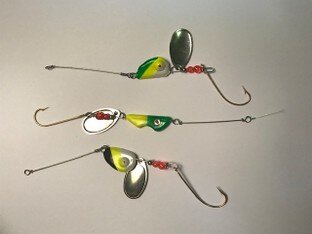 This lure can be fished in a variety of ways that include a "splash count" start retrieve as soon as it hits the water), all the way to the bottom.   Your retrieve can vary from a shuffle (will explain later) to a steady slow retrieve or with a hesitation during a steady retrieve.
Nothing is given for anglers, so oftentimes anglers must work their retrieve according to speed and style, even the count (time allowed for the lure to sink to find fish suspended). On the average, most weight forwards will drop at a rate of 1 ft. per sec.  In order to fish suspended fish at 15ft., merely give the lure a 15 count.  Depending on the speed of your count, each number in the count should be 1 sec.
The newest or likely the most favorite by walleye anglers today
Another type of casting lure, and probably considered the most modern, is the casting harness, a.k.a. Mayfly rig.  This lure is merely a short leader harness (14" to 20" in length) and having to be used with some sort of weight.  Weight can be an egg sinker or an inline sinker, both attached in front of the harness giving it's needed weight in order to cast.  The harness is no more then a single spinner blade on a clevis.  Blade style can be whatever you prefer, some use Indiana and I use Colorado style.  Then following the blade are 4 to 6 beads (prefer #4 size) and color may or may not matter.  I do myself prefer yellow chartreuse or red colors, but whatever your favorite might be, then use it. Hook size should not be to large.  Most will use a #1 or #2 size.  Long shank Aberdeen or shorter shanked with bait holder style bronze hook are fine. 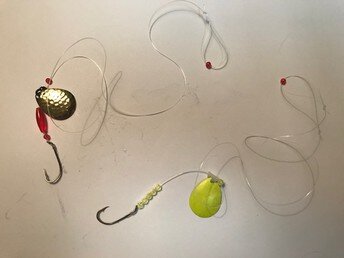 Weights can vary to as light as 1/4 oz. to as heavy as 1 1/2 oz. sinker.   Weight is determined by the overall depth of the water, how deep the fish are and how fast the drift is moving the boat.  The average weight used is 3/4 oz. sinker, but the past couple years charters have been known to go heavier with weights up to 1 oz. The drop rate is often regarded as 1.5 ft. per second with these weights. 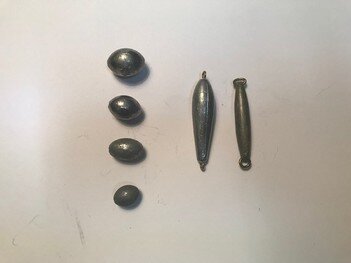 These lures can be retrieved identical to the way a weight forward spinner is fished.  Use a slow steady retrieve and a shuffle.  Be prepared, strikes are often very light.  Many times it appears as if the line is just tightening. This indicates a pick-up by a walleye.  One of the biggest tips I can give anglers using weapons/harnesses is be sure that your drag is not too tight.  Most of the time the walleye will just 'suck' it in and you'll loose many fish due to a overtight drag.  When the hook-set occurs, majority of the time the hooks connects with the membrane in the mouth of the fish, so horsing the fish with a oversight drag or to fast of reel/retrieve will cause the hook to pull,  loosing your opportunity for a  walleye in the boat.
Again, using worms with this type of lure is a must, but preferably just a piece or half a crawler.  You can gob the worm on the hook, but preferred method is to hook the piece of worm through the very tip if   it.  The idea is to mimic a mayfly or bug in the water.  While the blades of the lure spinning resembles the wings, the beads - the body of the mayfly, the short piece of worm is the tail.  Again, to long a worm (piece) will often lead to short strikes. 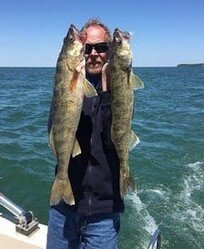 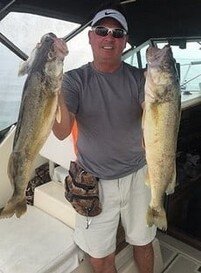 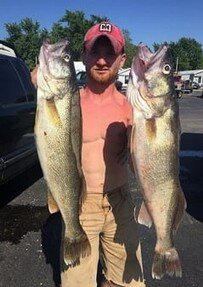 Now that you have some idea about casting lures, follow me to the next page ......